Since this is the 34th Anniversary of my husband's death, I wanted to repost this in memory of him.

This is day 21 in The Family History Writing Challenge.  I have been thinking about writing this story all month.  It is the hardest story I have to write.  I don't know if I will be able to do it justice.  Sometimes you can be too close to a story to tell it very well.  I guess we'll see.  This is my story.

On July 2, 1979, I was at home with my children.  My husband, Roy, was at work.  He was a trooper with the Indiana State Police.  He had now been working with them for three years.  We moved to the area about 2 1/2 years ago.  We had made friends in our town and lots of friends on the department.  The Indiana State Police was a huge family in those years.  My husband had just gotten back from a two-week camp for Officer's Training with the Army National Guard.  He was now a Second Lieutenant.

He had returned a few days before and still had a couple of days off.  We decided it would be a great time to redo our daughter's bedroom.  We took the furniture out of the room and removed the carpet, new carpet was going to be installed the next day.  We got the room painted and everything was ready for the carpet delivery.  Our daughter's bed was put in her brother's room where she was going to spend the night.

The State Police worked  a six day on, two day off swing shift in those days.  Roy was working an evening shift that evening.  He left before dark to start his shift.    He shift would be over at midnight. It was summer so the kids and I played outside.  Around dark the kids came inside and and started getting settled for the evening.  Roy called and said, "I'll be by to get some dinner in a little while."  He normally came home for dinner on the evening shifts.  Some times he got to eat before he was called back out, other times he didn't.  This was a good evening, things must have been quiet on the roads.  He ate bacon sandwiches and sat down and watched "Black Sheep Squadron"  with Robert Conrad.  It was his favorite show at the time.  Since it was summer I'm sure it was a rerun.  Before he headed back out we went outside and lit sparklers with the kids.  He kissed all the kids goodnight and headed out the door.  I hollered at him, "Hey, where's my kiss?" He leaned back and gave me a quick peck.  I said, " You call that a kiss? He laughed and said, "You'll get yours later!"  I stood on the porch and watched him drive away.

I got the kids to bed and watched TV and picked up the house.  I had gotten ready for bed it was getting close to midnight.  I was reading a book, when the phone rang.  One of the other troopers wives called me.  She was a little stressed out.  She said, "Do you have the scanner on?"  I said, "It's on, but I haven't been listening,  I've been busy around here."   She went on to explain that something was going on.  I told her I would start listening.  I brought the scanner to the living room, near the phone, and started listening to the radio traffic.  If you didn't know all their call signals, you wouldn't know what was going on.  I knew the signals.  It didn't take long for me to know they had a trooper injured.  I heard them talking and thought they were talking about a friend of ours.  I called my friend back, and said I thought that Tommy was hurt.  She wasn't very responsive and said, "Maybe."  She seemed different than the first conversation, and was in a hurry to get off the phone.  I sat and listened to the scanner some more trying to get the details.  I soon heard they had a 10-0, which means a death.  They were talking about meeting at the outskirts of our little town and picking up the wives,  so they could notify the "widow".  My friend who had called and I were the only wives in that little town, and the last time I had talked to her she said, Bob had called her a few minutes before.

At that point, I knew where they were coming.  I knew I needed to get dressed.  I believe I was in shock.  I got up and got dressed and waited.  I heard the cars pull up out front.  I heard the car doors shutting.  I walked to the door and opened it before they could knock.  My husband's friend, Bob was standing there with several other troopers, their wives, and the chaplain.  He just looked at me and said, "What can I say hon?"  He knew I had been talking to his wife and listening to the scanner.

They came in and I broke down for a few minutes.  Then they started asking me questions.  Who do we notify?  Can you give us addresses and phone numbers.  All I could think of was "they need to tell his mother".  They told me they would send a trooper to his mother's house and to my mother's house.  I said, "Okay."  They called and made the arrangements for the troopers to make notification.  They went across the street and got my neighbors.  A women who was like a grandmother to my children, Wilma and a friend, Vickie.  They came over to sit with me.  All at once a thought went through my mind, "she's going to be alone when they tell her."  I immediately got up and went to the phone and called my sister-in-law.  The phone woke her, she answered with an apprehensive sound in her voice.  I said, "Sondra, R.E. died tonight, they are going to tell your mom.  She needs someone there with her right away."  Her husband was asking what was going on.  She told him, "R.E.'s dead."  He told her to hang up, it was just a prank.  She said, "No, it's Betty!"  I don't remember what was said after that, I'm sure she called her brother and they got to her mom as quickly as they could. 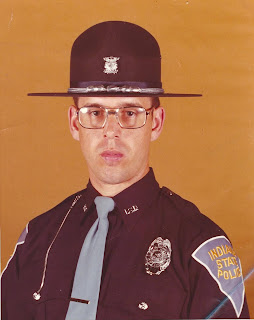 Before long, my house started filling up.  My mother and my sisters showed up.  Roy's mother and his brother and sister showed up.  There were just people coming from everywhere.  Unbelievably my children slept through it all.

As morning got there, I knew I was going to have to tell the children.  I didn't want them to come out into the crowded house and not know what was going on.  I decided to go into the children's bedroom by myself.  My daughter was 6 years old, my son's were four and two.  I went in and sat down with the older two and put the little one on my lap. I told them that something bad had happened to Daddy and he was dead now.  He wouldn't be coming home anymore.  The four year old just looked at me, but my daughter was extremely upset.  She said, "No, I hate you for telling me that!"  The little one didn't understand he just knew it was bad. 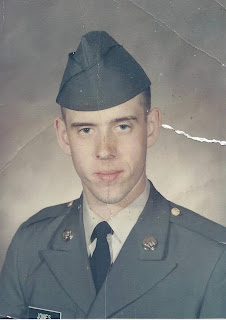 My husband, Roy E. Jones, died in the line-of-duty on July 3, 1979, just a few minutes after midnight.  He had been about 2 minutes from home when he got a call that another small town had a drunk driving running from him and he was heading in my husband's direction.  He turned around and went back to assist the Town Marshall.   He had spent his life serving.  He had been a Green Beret in the Viet Nam War, on a Special Forces Reconnaissance Team.  He served with the 101st Airborne Division.  He came home form the the war with many medals, including the Bronze Star.  He died at the age of 31.